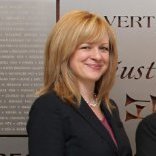 After reviving Chicago-Kent’s student chapter of the American Constitution Society as the President from January 2013 to May of 2014, Dana has moved into the Lawyer Chapter Liaison role.  Dana earned her undergraduate degree in neuropsychology from Washington University in St. Louis, where she led a student organization that provided school-mandated annual rape-prevention peer education to all students.

At Chicago-Kent, she has focused on providing access to justice to indigent litigants, including: an internship at the Public Defenders, volunteering as a Guardian ad Litem for minors in guardianship proceedings, managing volunteers at Chicago-Kent’s Self Help Web Center at the Daley Center, and as a Family Rescue advocate assisting domestic violence victims seeking orders of protection.  She will be graduating in December 2014 and hopes to make a career in a policy organization like the American Constitution Society.