Thanks to Ilya Shapiro of the Cato Institute for making the trip to come talk to us about the War on Drugs and its effects on the Constitution!

Mr. Shapiro went through the entire Constitution and discussed how the War on Drugs affects each provision.  His knowledge of the case law was impressive and his arguments for decriminalization were extremely well-founded.  He also stayed to answer some questions from the group, including suggesting that the political process would be a better avenue for change in this arena than the courts.  We are only the second chapter he has given this talk to so we were honored to hear it.

Thanks to everyone who came out, especially given that it was a non-traditional time slot!

Our next event will be a debate on fracking with John Kunich and Bill Rau.  It will be Nov. 19th at 12pm in room C20.  More details to come. 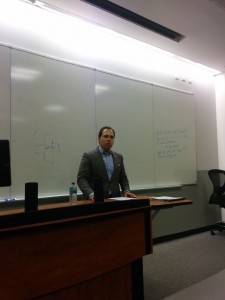 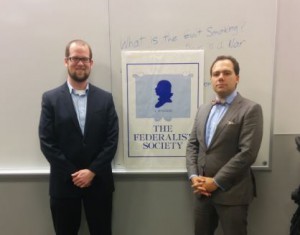 Bitcoin event recap and Ilya Shapiro on the Drug War next week!