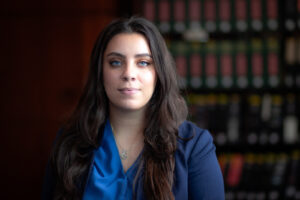 Jumana Abdelrahman is a First Generation American and a First Generation Law Student. Jumana received her Bachelor’s in English at the University of Illinois at Chicago, specializing in American Literature and Rhetorical Writing, and with minors in Anthropology and Political Science.

Jumana is a member of Chicago-Kent’s Trial Advocacy Team. She has competed in the Syracuse National Trial Competition and the South Carolina Trials and Tribulations Competition, earning multiple best advocate awards and one Outstanding Advocate Award. Jumana also serves as the Vice President of the Muslim Law Student Association (MLSA), as well as a 3L Representative of Women in Law (WIL).

Jumana has volunteered at various organizations including Together We Cope, which focuses on preventing homelessness, as well as Ascend Justice, which aids survivors of domestic violence in pursuing Orders of Protection against their abusers.

In her free time, Jumana enjoys planting, reading, and traveling.