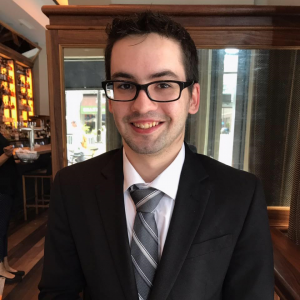 Nick hails from the Twin Cities, raised in Plymouth, MN, where he grew up and worked before attending Chicago-Kent. In 2015 he graduated with a B.A. from Gustavus Adolphus College in St. Peter, MN, with a triple major in Physics, Biochemistry and Molecular Biology, and Chemistry. While in college he was an avid musician, performing as a violinist with the Gustavus Symphony Orchestra and serving as concertmaster for the Gustavus Philharmonic Orchestra. It was only after he graduated college when he first conceived of becoming a lawyer.

Prior to starting law school, Nick worked as a laboratory technician for Ardent Mills, where he did quality assurance testing on bread products. During his 1L summer, and continuing until early 2018, Nick externed for the Honorable Brigid Mary McGrath of the Circuit Court of Cook County, Law Division. During his 2L year he worked as a research assistant for Distinguished Professor Lori Andrews, where he focused on privacy issues in the criminal justice system. This past summer Nick was a summer associate at Fogg & Powers LLC, where he assisted with prosecuting patents relating to electronics and telecommunications technologies.

Nick joined the Chicago-Kent Law Review as a junior associate for the 2017–18 academic year. His Note, titled “The Biological Algorithm: an Analysis of DNA Patentability Under Myriad” is expected to be published with the Law Review this upcoming year. Along with the Law Review, Nick served as an Associate Editor for the Chicago-Kent Journal of Intellectual Property. In addition to serving as an EAE for the Law Review this upcoming year, Nick is an incoming member of the Moot Court Honor Society, as well as a member of the Intellectual Property Law Society.

In the rare occasion that he has free time, Nick enjoys playing music, reading, video games, and exercising. Since starting law school Nick has been a violinist with the Chicago Bar Association Symphony Orchestra, a lawyerly group that performs a few times each year.