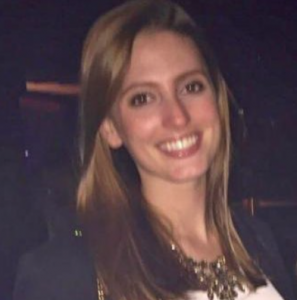 Taylor L. Kosla joined the Justinian Society as a 2L in 2015 and was named President of the Chicago-Kent Chapter in 2016. Taylor is a 3L at Chicago-Kent. She obtained her undergraduate degree from the University of Illinois at Urbana-Champaign in Science.

As President Taylor has played a key role in increasing student membership and organization awareness. She has reached out to various alumni and Justinian members to provide incentives to new members including wine bottles and sponsored lunches.

Taylor is an active member of Reflex Sympathetic Dystrophy Syndrome Association, a nonprofit organization dedicated to raising awareness and funding research on the treatment and prevention of Reflex Sympathetic Dystrophy Syndrome. Taylor became involved in the organization after her mother was diagnosed with this painful disease.

Taylor grew up in the northwest suburbs of Chicago. She graduated from Schaumburg High School in Schaumburg, Illinois, where she was the captain for the school’s varsity basketball and golf team. Today Taylor resides in Chicago where she attends school and works as a law clerk at a personal injury and medical malpractice firm, Levin & Perconti. After graduation Taylor aspires to continue a career in litigation as a trial attorney. She is also a member of the Illinois Trial Lawyers Association.