Brown Bag Lunch with the Cook County Public Defender, Sharone Mitchell. Come with your lunch & some questions to ask him! Keep an eye out for more brown bag lunches throughout the year 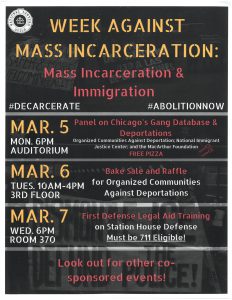 Please join National Lawyers Guild – Chicago-Kent Chapter for a panel discussion about the Chicago gang database and how ICE is using it for immigration enforcement. Officially known as the Strategic Subject List (SSL), the gang database is a “predictive policing” tool that CPD uses to surveil and target black and brown communities. The content of this deeply flawed database is being shared with ICE, leading to arrests, detention, and deportation actions against Chicago residents.

Activists and lawyers from Organized Communities Against Deportations, The Roderick & Solange MacArthur Justice Center, and Heartland Alliance’s National Immigrant Justice Center, working in various capacities on this issue, will share their experience and insight. END_OF_DOCUMENT_TOKEN_TO_BE_REPLACED

Join us on Tuesday, February 9, to honor Fred Korematsu, a civil rights hero. In 1942, at the age of 23, Korematsu refused to go to the government’s incarceration camps for Japanese Americans. After he was arrested and convicted of defying the government’s order, he appealed his case all the way to the Supreme Court. In 1944, the Supreme Court ruled against him, arguing that the incarceration was justified due to military necessity.

In honor of Fred Korematsu day, we are holding a special screening of the documentary “Of Civil Rights and Wrongs” followed by reflections by a group of panelists, including a former internee of the Japanese internment camps.

END_OF_DOCUMENT_TOKEN_TO_BE_REPLACED

Last October, nearly one-third of Chicago City Council openly opposed the mayor’s budget. Despite Chicago’s tradition of machine politics, a new wave of progressive politicians has swept into the body, challenging regressive tax policies, increasing economic privatization, and cutbacks to both public education and services to low-income Chicagoans. One of the leading voices of this growing movement is 10th Ward Alderwoman Susan Sadlowski Garza. END_OF_DOCUMENT_TOKEN_TO_BE_REPLACED 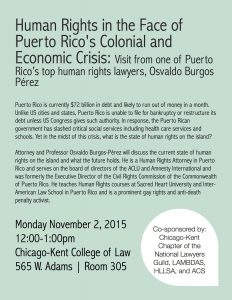 Puerto Rico is currently $72 billion in debt and likely to run out of money in a month. Unlike US cities and states, Puerto Rico is unable to file for bankruptcy or restructure its debt unless US Congress gives such authority. In response, the Puerto Rican government has slashed critical social services including health care services and schools. Yet in the midst of this crisis, what is the state of human rights on the island?

Attorney and Professor Osvaldo Burgos-Pérez will discuss the current state of human rights on the island and what the future holds. He is a Human Rights Attorney in Puerto Rico and serves on the board of directors of the ACLU and Amnesty International and was formerly the Executive Director of the Civil Rights Commission of the Commonwealth of Puerto Rico. He teaches Human Rights courses at Sacred Heart University and Inter-American Law School in Puerto Rico and is a prominent gay rights and anti-death penalty activist. END_OF_DOCUMENT_TOKEN_TO_BE_REPLACED

Join us on October 21, 2014 at 12:00pm in Room 580 for a discussion on the disturbing trend of police militarization in light of the events in Ferguson, Missouri. END_OF_DOCUMENT_TOKEN_TO_BE_REPLACED