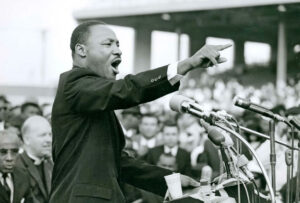 Dr. King was a minister, academic, and activist who served as a pillar within the Civil Rights Movement. Although there were pushes to honor Dr. King with a federal holiday shortly after his assassination in 1968, the holiday was not signed into law until 1983, after being defeated once before in 1979. The holiday was officially observed in 1986; however, it was not until 2000, that all 50 states officially recognized this holiday. As “a day on, not a day off,” Dr. Martin Luther King Jr. Day is recognized as a national day of service.

“Make a career of humanity. Commit yourself to the noble struggle for equal rights. You will make a better person of yourself, a greater nation of your country, and a finer world to live in.”

We encourage you to educate yourself on the experience of Black Americans to support cultural competence, awareness, and informed allyship. We encourage you to make a career of humanity, through committing yourself to taking a stand against injustice that forwards inequity within society.

This week join the Office of Diversity, Equity, and Inclusion and Chicago-Kent College of Law for the 2023 MLK Forum on Thursday, January 19, 2023 at 5:30 PM. This year’s theme is “The Pathway to Equity and Freedom: Dismantling Systems of Oppression through Public Health and Safety Reforms”. RSVP Here https://forms.gle/aiuzE2sMTQcX4rWY9 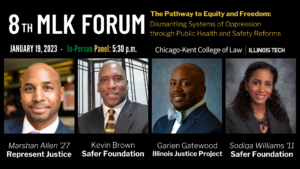 This is a private group. You will need to be approved as a member.