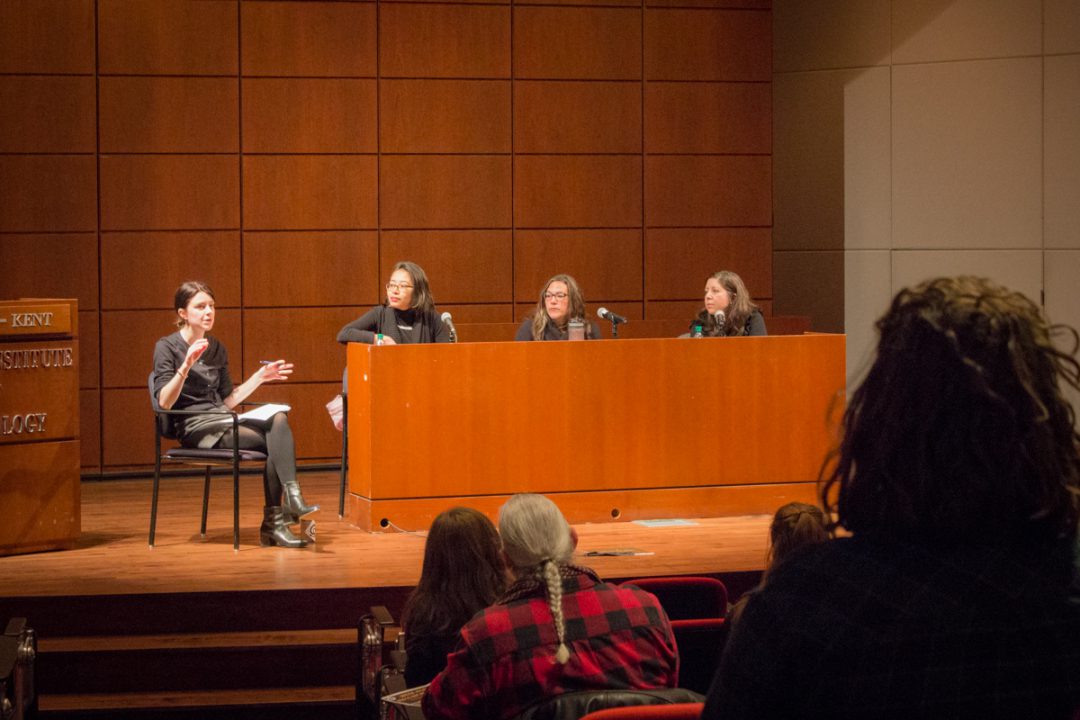 This event recap is cross-posted from the CK-Now blog This year the National Lawyers Guild’s 2nd annual event on mass incarceration focused on the intersection of mass incarceration with immigration. The panel discussion looked specifically at the targeting of immigrants for deportation using the Chicago Gang Database, officially known as the “Strategic Subject List.” Rosie O’Malley opened the discussion by defining the phrase “prison industrial complex” (PIC) by using a definition from Critical Resistance:

The Prison Industrial Complex is the overlapping interests of government and industry that use surveillance, policing, and imprisonment as solutions to economic, social and political problems.

The NLG believes that institutions such as ICE, immigrant detention facilities, gang databases, etc. are part and parcel of the PIC and that any expansion of the prison system disproportionately impacts poor, black and brown communities across the board.

Irene Romulo was born and raised in Chicago. She began organizing housing and immigrant rights campaigns in California then returned to Chicago and joined Organized Communities Against Deportations (OCAD) to  aid in their work fighting the criminalization of black and brown communities. She is also involved in international solidarity organizing, has organized alongside day laborers, and is on the Chicago Community Bond Fund staff. Sheila Bedi is a clinical associate professor at Northwestern Pritzker School of Law and an attorney with the Roderick and Solange MacArthur Justice Center. Sheila has challenged abusive prison conditions and supported policies to reduce incarceration rates and improve access to public education and mental health services.

Her work supports formerly incarcerated people and their families in campaigns to close abusive prisons and jails, improve access to counsel, develop alternatives to imprisonment, and reduce the number of children in the adult criminal justice system.

Claudia Valenzuela is the detention project director at the National Immigrant Justice Center. Claudia represents non-citizens before the Department of Homeland Security (DHS), the Executive Office for Immigration Review (EOIR) and the federal courts via removal defense, impact litigation and administrative advocacy.

She is a 2002 graduate of DePaul University College of Law and is a former Equal Justice Works Fellow. When she was at DePaul, Claudia served as a legal intern for NIJC developing a program for outreach and legal services to Chicago’s Guatemalan and Salvadoran communities. Sheila Bedi works on the policy front with organizations such as the Black Youth Project, drafting litigation and FOIA requests, litigating civil rights cases for people targeted by the federal government using the gang database. Together they aim to use individual cases to build campaigns for policy changes that will have lasting impact. Claudia Valenzuela works at the NIJC, a legal aid organization for immigrants. They pay attention to intersections with criminal law and follow trends such as the school to prison and prison to deportation pipelines. On a policy level, they are following warrantless arrests and looking at state-level protections.

Introduction to the Gang Database

To talk about the work her organization is doing on the gang database, Irene started by sharing the history of OCAD. It began with immigrant youth justice league activism that led to President Obama issuing the DACA executive order. She noted that “President Obama didn’t set up DACA out of the goodness of his own heart; it was a lot of organizing that led to it.”

OCAD’s organizers saw how immigration enforcement changed priorities and started targeting immigrants with criminal backgrounds to separate them from the “good immigrant” narratives. They believe this approach divides their community and began to see how the criminal justice system was entangled in deportation. They’ve identified problems with over-surveillance and harassment from police officers that led to deportation, sometimes with much earlier offenses being used as justification.

With 80,000 people listed in the database, 80 percent of whom are minorities, repercussions are especially hard for immigrants. OCAD believes the database is a racialized system that can use any justification—where you live, if you stand on the corner in the wrong place, who you know—to add people to the list and share their information with ICE. Irene noted that being in a gang is not a crime and that gang members deserve the same rights and freedoms as anyone else.

By partnering with other organizations, OCAD believes they can be stronger together. They’ve looked at cases around police brutality, pushing for accountability after seeing “predictive policing” practices being used to share information to break down their communities.

Legal Strategies Against the Gang Database

Sheila Bedi described the case of a young man named Luis who was targeted as a gang member without any evidence and thus was ineligible for DACA. She has worked to get him off the gang database.

She said their argument is that due process was violated in how information was communicated to ICE because there is no notice when someone is added to the database and no way to contest it/be removed. If it were an Illinois case, the barrier under state law would be lower, she said, because it is easier to argue the database is racist because of the way it targets people.

Claudia Valenzuela said the NIJC is looking at the 10th Amendment, at the federal government using state employees. Since immigration judges do not have the authority to hear constitutional claims in the civil courts, they have to prove a negative. Next, moderator Rosie O’Malley asked about the panelists’ biggest challenges as immigration advocates.

Irene Romulo said the challenge for her organization of undocumented advocates is that the state can charge, kill, deport them at any moment. She said this power was not a deterrent for her or for her organization, though. Their basic challenge to survive also comes with the challenge of keeping their vision against the narratives that divide and break down families and communities by dehumanizing specific individuals who still should have rights.

We are here to change what is happening: to look for ways to work together to change the narrative, to highlight the statements and figures who set these policies.

Sheila Bedi said OCAD has been a really important group because they are challenging the good immigrant/bad immigrant narrative and showing that nobody should be dealt with this way. In the case of Wilmer Catalan-Ramirez, they had 8 lawyers, 12 law students, and a team of supporters to get him out, but he still has to deal with the effects of 10 months of being locked up. Most people don’t have such legal firepower behind them, she noted.

Claudia Valenzuela noted even “allies” are quick to dismiss anyone who can be labeled a criminal. On a national level, the rhetoric about “dangerous immigrants” is leading to funding and incarceration on a massive scale. She finds it especially painful to see how this affects other immigrants who accept these policies. She believes the United States has a long way to go to be true to progressive ideals.

She noted that many people are worn down by detention and give up their rights when they have indefinite detention. She does not believe all hope is lost, even with the recent Jennings v. Rodriguez SCOTUS case on indefinite detention, since the ACLU and others will bring more arguments in new cases around this issue.

Role of the Legal Profession

Irene said in doing organizing work, it is important for lawyers to be cooperative and to understand the broader importance of the movement. She said sometimes their organization may want to file a lawsuit and knows they are going to lose, but the point is filing the suit. Sometimes lawyers are frustrated by that and will advise not to take action.

Sheila Bedi said part of being a lawyer who supports movements is listening and being cooperative, and understanding that your knowledge or way of solving problems is not better or more effective than other ways.

We are trained as lawyers to want to win, and it’s not always what’s important or best in terms of the larger movement work. Lawyering is just one part of the work.

View all posts by LibTech