Did Joliet Make the Right Choice for its Drinking Water Supply?

The city of Joliet (“City”), the fourth largest city in Illinois, has decided to secure its drinking water from Chicago instead of Hammond, Indiana.[i] Joliet has historically been dependent on groundwater, pumping from the Ironton Galesville aquifer at an unsustainable rate.[ii] The City has known since the 1960s that the pumping rate exceeds the rate of recharge into the aquifer.[iii] Estimates show the aquifer will likely run dry by the year 2030, forcing the City to seek out alternatives.[iv]

Joliet examined fourteen alternative water sources in Phase I of its exploration.[v] During Phase II, five sources were studied in more detail to replace the existing water source in Joliet, including several municipal Lake Michigan intake systems and the Kankakee and Illinois Rivers.

In January 2020, the Joliet City Council selected Lake Michigan as the water source,[vi] and, in late January of this year, chose the Chicago Department of Water Management’s (CDWM) system over constructing a new intake system to obtain treated water from Hammond.[vii]

The eight city council members were faced with two options:

Ultimately, had Joliet chosen the New Indiana Intake alternative, it would “have greater control over factors related to the implementation, operation, and cost of its treated water supply.”[x] The CDWM alternative, on the other hand, requires less infrastructure, resulting in a lower debt burden for the City. But Joliet would be a long-term customer of the City of Chicago and subject to changes in the cost of service.[xi] 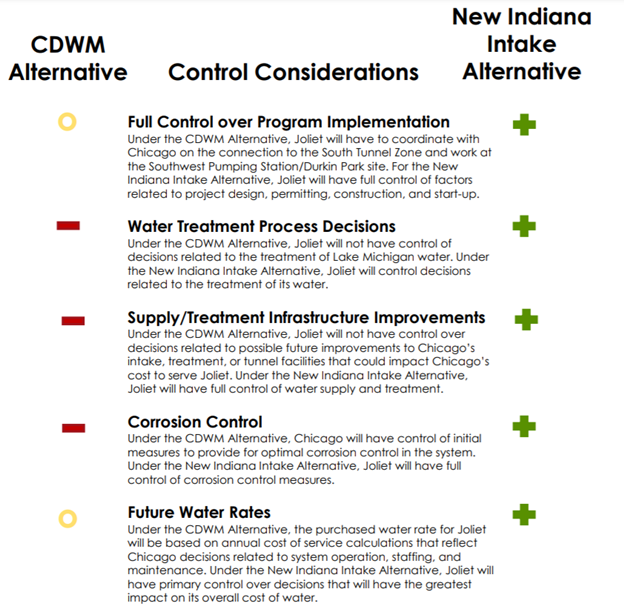 In the short-term, water rate increases are slightly lower with the CDWM. However, the savings provided by a CDWM approach are less because economies of scale (a proportionate saving in costs gained by an increased level of production) do not apply to costs for the purchase of water from Chicago—Joliet will never be able to produce water in the CDWM scenario.[xii] And the CDWM alternative is vulnerable to price increases.[xiii]

In the end, Joliet chose the CDWM alternative over the New Indiana Intake alternative even though the latter would have provided greater control, likely better water quality, a potential source of revenue, greater resiliency, fewer long-term savings, and no fluctuation in water rates to be dictated by Chicago. 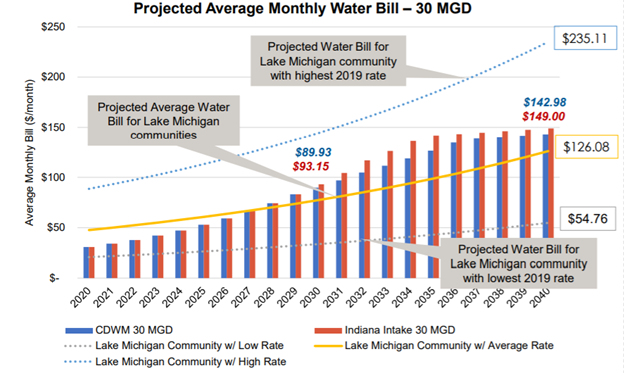